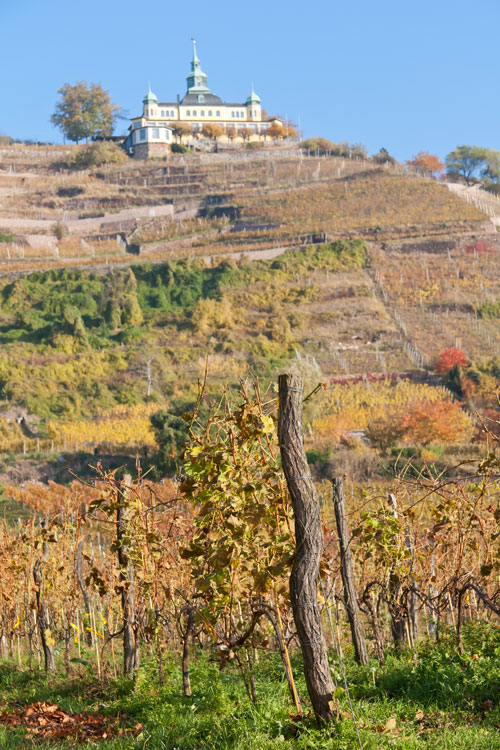 Wine-growing, cultural monuments and stairs as high as Mount Everest

Today a district of Radebeul, Oberlössnitz was an autonomous rural community up until 1934. Today, the area is best known for its traditional Saxony wine-growing and villa-like urban developments.

Wine-growing has been a tradition in Oberlössnitz since the Middle Ages. The practice was supported by the local margraves and bishops from the 10th to the 12th century. Towards the end of the 19th century, wine-growing was ceased completely – partly as a consequence of the vine pest catastrophe of the 1880s that laid waste to much of Lössnitz – and was not resumed until several decades later. Today, award-winning varieties of a wide range of different grapes are grown in Oberlössnitz: Müller-Thurgau, riesling, savagnin, pinot blanc, pinot grigio, regent and dornfelder.

But wine-growing in Oberlössnitz is not just an important culinary tradition. From the end of the 16th century up until the early 19th century, numerous, often magnificent, manor houses were built as summer residences for the vineyard owners. This development gave Oberlössnitz its unmistakable appearance, much loved by locals and tourists alike, with well-preserved historic villas nestled among terraced vineyards.

Today, a large number of cultural monuments bear witness to the once grandiose history of Oberlössnitz. One of the most important of these is the Hoflössnitz wine-growing estate, a well-known ensemble comprising buildings and vineyards on the left and the famous Spitzhaustreppe steps. Now home to the Saxon Wine-Growing Museum, Hoflössnitz was the centre of courtly vineyard estates in Saxony for nearly 500 years.

Perched atop the flight of 397 steps that make up the baroque Spitzhaustreppe, lies the former Radebeul summerhouse, the Spitzhaus. Clearly visible from afar, the building is situated on the edge of the Elbe valley basin, approximately 100 metres above Hoflössnitz and is considered one of Radebeul’s best known landmarks. Just a stone’s throw from the Spitzhaus, visitors can pay a call to Radebeul’s Bismarck Tower, built in 1907. As one of around 145 towers built to honour Germany’s first chancellor Otto von Bismarck that are still preserved today, guests are invited up to take in the long-ranging views across the Elbe Valley.

Every year, the Spitzhaustreppe not only attracts culture enthusiasts and wine lovers to Oberlössnitz, but also extreme athletes from all over the world. Since 2005, these steps have formed the venue of the international Mount Everest Stair Race. This race is considered to be the most difficult and the longest extreme stair race in the world. Runners must run up the steps 100 times within 24 hours, covering a vertical height of 8,848 metres, equivalent to the height of Mount Everest.

The district’s appearance is also shaped by the protected landscape that stretches from Oberlössnitz in the east all the way to Zitzschewig. The terraces and vineyards bound by dry stone walls were placed under protection in 1999 and designated as the “historic vineyard landscape of Radebeul”.

Together with the adjoining district of Niederlössnitz, the tree-lined avenues and leafy green villa neighbourhoods of Oberlössnitz are still some of the best addresses and most popular residential areas in Radebeul today. A large number of the villas in Oberlössnitz and Niederlössnitz are listed in Radebeul’s monument register. Accordingly, these properties are highly coveted today and developers should be able to manage them with corresponding responsibility. But modern construction with individual solutions is absolutely encouraged.

Since the 1920s, single family and semi-detached houses have become popular alongside the prestigious villas as a new and practical type of residential building. There are also a number of houses suitable for multiple occupancy, which were built in the 1920s and 1930s by cooperative building associations, inspired by the ideals of the garden city movement.

Thanks to the extensive restoration of historic buildings that was started in the early 1990s, nearly all of Oberlössnitz has now been completely renovated. As a result of the privatisation of the construction sector, individual residential buildings and entire neighbourhoods with detached and semi-detached houses as well as apartment complexes have sprung up in attractive locations over the last two decades.