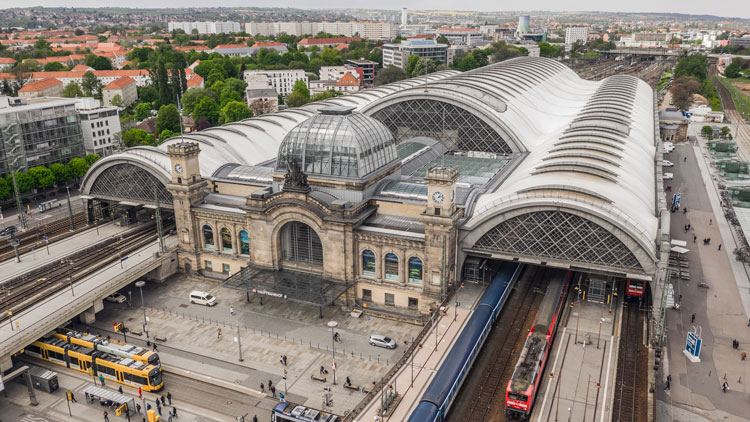 Split into East and West sub-districts, Südvorstadt is a district of Dresden, the state capital of Saxony. Although the district is in the borough of Plauen, historically it is more in common with Dresden’s historic city centre as, unlike the other districts in this borough, it didn’t develop from an existing village centre, but has always belonged to Dresden’s suburbs.

Situated to the south of Dresden, the area was long used purely for agriculture due to the highly fertile soil. Still popular today, the original Feldschlösschen brewery was built in the 1830s at the foot of the Hahneberg hill, of which little remains today.

Although Südvorstadt was officially incorporated into the city of Dresden in 1835, urban development only really began to take hold from 1850 onwards. One of the driving forces behind this development was the construction of the Böhmisch Bahnhof, the original predecessor of what is today Dresden’s main railway station.

Centred around Schweizer Strasse, between the main station and Nürnberger Strasse, the affluent Swiss Quarter with its numerous upper class villas was developed in the second half of the 19th century, with the eponymous “Schweizerhäuschen” at its heart. Many of these villas survived the air raids on Dresden in 1945, including Villa Möckel, Villa Haniel and Villa Rübsamen. Lovingly renovated, they still continue to influence the appearance of large parts of this suburb.

Meanwhile, other important developments were also taking place in Dresden’s Südvorstadt at the same time. Among them, the construction of the American Quarter around 1870, named after the American Church on Bergstrasse, which was almost completely destroyed in the Second World War. The Bavarian Quarter emerged around 1900, centred around the two squares, Nürnberger Platz and Münchner Platz. The residential quarter comprises many upper class houses from a period that straddles historicism and art nouveau, as well as numerous shops, cafés and restaurants.

In 1953, large scale residential housing construction began in the ruined parts of Südvorstadt, mostly using a traditional brick construction style. Along with the well-preserved Gründerzeit buildings and the functional architecture typical of the 1960s, these residential areas make up the distinctive appearance of the Südvorstadt today, with its many historic, characteristic buildings, housing complexes and infrastructure.

Thanks to its quiet and yet very central location, its mix of restored villas, DDR functionality and attractive new housing, the Südvorstadt district is a much sought after and highly popular place to live in Saxony’s state capital. Its popularity is also helped by its close proximity to Dresden’s city centre, the large number of parks and green spaces such as Fichte Park, Hoher Stein and Beutler Park.

The Südvorstadt combines vibrant city life, the flair of student living around Dresden’s technical universities, the TU and the HTW, as well as a quiet location on the city outskirts with excellent access to local and long distance transport systems and all the facilities to cover your everyday necessities.